Verizon and AT&T: kiss and make up 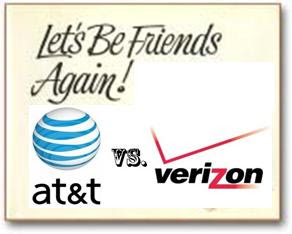 Just announced this week, Verizon and AT&T have decided to drop the charges against each other.  Oh pooh, I for one am very disappointed with this development, I wanted the battle to drag out and watch both providers drag each others network through the mud while highlighting each others weaknesses, as the old adage goes, when businesses compete, consumers win.  If the battle had stretched out, both carriers would have pointed to weaknesses in each others network that would then force them to shore up their services.  In the end the consumer would reap the benefits, that is whats known as a win win.  Plus Luke Wilson as a spokesperson, classic, the force is strong with you Luke.
Verizon's argument that AT&T's network is too weak to adequately support the iPhone is well documented and accurate, and so is AT&T's somewhat weaker assertion that Verizon's network does not allow simultaneous voice and data use.  Lets just hope that now that they are not focused on dragging each other down, they will spend their money on investing into their network and lowering their damn prices.  $90/month for a Droid or an iPhone is too rich for my blood, but as you know where there's a will there's a way.
Read: How to lower your iPhone bill to $55
at 2:55 PM