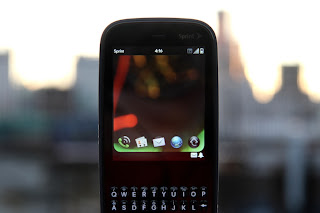 I wont say I completely hate the device but I will say that its not all good.

I went by my local Sprint store to pick up the Pixi, 3 hours later I walk out and the phone is still not activated. The guy tells me that they are having some provisioning problems and to just take the phone home and it should be activated by the time I get there. I guess that was my first clue.

Okay so the phone finally gets activated and its up and running, I sync my Palm profile to it, (Palm takes all your apps, notes, tasks, contacts, etc and backs it up for you in the background, so if you switch to a new WebOS phone, lose your current phone, or whatever all that information can be resynced back to your device, very cool) takes about 30 minutes. Then I sync Google to it, another 15 minutes, all the while the phone's network connection is jumping from Ev to 1x to R like crazy. I rush home to plug it into the charger before it dies on me. Got a message saying an update was available and downloaded the 1.3.1 OS upgrade.

Play time, the phone is exactly like the Palm Pre so I was already familiar with the UI. Swiping stuff, pulling and dragging cards all felt pretty natural except, the significant lag time it took for things to open. If I'm running 6 cards with all 6 playing some kind of media content then I would understand, but if I am just text messaging and emailing, and trying to open the browser then wtf. As I wrote earlierthe Pixi is a little underpowered, compared to its big cousin the Pre, but from what I could gather; Pre owners that upgraded to OS 1.3.1 were doing fine. So my conclusion is that it must be some hardware issue at fault here.

The lag is enough to drive me crazy, seriously, I have to wait 10 seconds for you to open up the card so I can make a call? The frustrating thing is that its not like this all the time, there are moments when the Pixi feels up to the job. When it is being responsive, the phone's appeal goes way up. The screen is small but not so small that its unbearable, the keyboard is solid and almost as easy to use as a Blackberry's (almost). The back cover is made out of a 1-piece soft rubber material that feels good in the hand, and gives the phone a durable look to it, and WebOS is its usual sexy self.

Most people will be happy with the Pixi, and Palm says its a device aimed at teenagers and women, but I'm a heavy user, I need my emails push right away, I want my Google Voice up 1 second after I ask for it, I want to be able to use Slacker. So with that said, I'm going going, back to back to Blackberry. I know, I know some might say I didn't really give the device a chance, but in all honesty I just wanted to test it out for a day to see what it was made of. If you're eyeing the Pixi as your next device, Id say give it a week, Palm and Sprint will hear about all the issues people are having with it and make some changes and the phone will be great(ahem) within a month, but for the meantime, Im sticking with what I know.