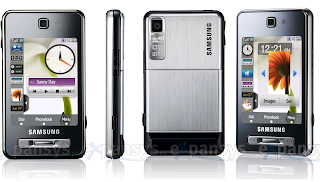 Have you ever been on your way somewhere and thought about grabbing your digital camera, only to change your mind because you decided that your cell phone camera would work just as well?
Five years ago my uncle bought a digital camera for $250, it was one of the best cameras on the market at that price point and it had a whopping 8 Megapixel lens.  Recently Samsung unveiled the Samsung AMOLED 12M (SCH-W880) the worlds first 12-megapixel camera phone with 3x optical zoom.  Not long ago 2MP cameras were a luxury to most cell phone users, then we quickly evolved to 3.2 MPs, and now we have 5MP cameras with flash and HD video recording embedded into our devices. Check out the specs on the Motorola Droid.  The quality of camera phones is leading many consumers to completely abandon their digital cameras.  Ebay is overstocked with thousands of good quality cameras that nobody wants.
My cell phone has become my pda, my mp3 player, my communication device, and soon it'll also be my digital camera.  As the technology used in cellular devices improves, so will the quality of the cameras embedded in them.  Because consumers demand it.  Gone are the days when cell phone cameras could only produce grainy, polaroid style, 250 color snapshots, nowadays it is hard to distinguish between shots taken on a cell phone camera and those taken on a standard digital camera.

Okay, I may have exagerrated a bit in the last paragraph.  Professional photographers/keen observers can easily spot the difference between a cell phone shot and a digital camera shot, but honestly the average consumer probably can't and may not care all that much.  In the age of twitter, youtube, and facebook, the average consumer wants to be able to take a shot and share it with friends, family, and strangers instantly and the cell phone is the perfect tool for that.
The evolution of cell phones as cameras has made it imperative that camera makers make better and more innovative products.  Nikon seems to be leading the way with forward focused products such as the Nikon S1000PJ, which allows you to project images and videos stored on the device onto a flat surface.  They have also created an aggressive marketing campaign utilizing celebrity Ashton Kutcher that has generated plenty of buzz for the company.  Samsung is developing creative products such as the Samsung DualView TL225 and at the same time setting high standards for other handset makers by putting powerful cameras into their smartphones.  I think Samsung has the right idea.

Instead of competing with cell phones, maybe digital camera makers can do more to invest in the development of camera phones.  For example, Nokia and Carl Zeiss have a symbiotic relationship that seems to be beneficial to both companies.  The two companies partnered up to release the Nseries line of smartphones that featured Carl Zeiss's Tessar and Vario Tessar Lenses.  These devices offer consumers a quality digital camera experience and an outstanding mobile platform that helps them make the most out of the digital content they capture.  This synergy makes Nokia's handsets more appealing to consumers and gives Carl Zeiss the opportunity to get more consumers using their brand, which will in turn lead to increased sales for their other line of products.

The bottom line is that we as consumers have less devices to lug around, spend less time fumbling to get the camera out, and spend more time enjoying and capturing the moments that make life memorable.